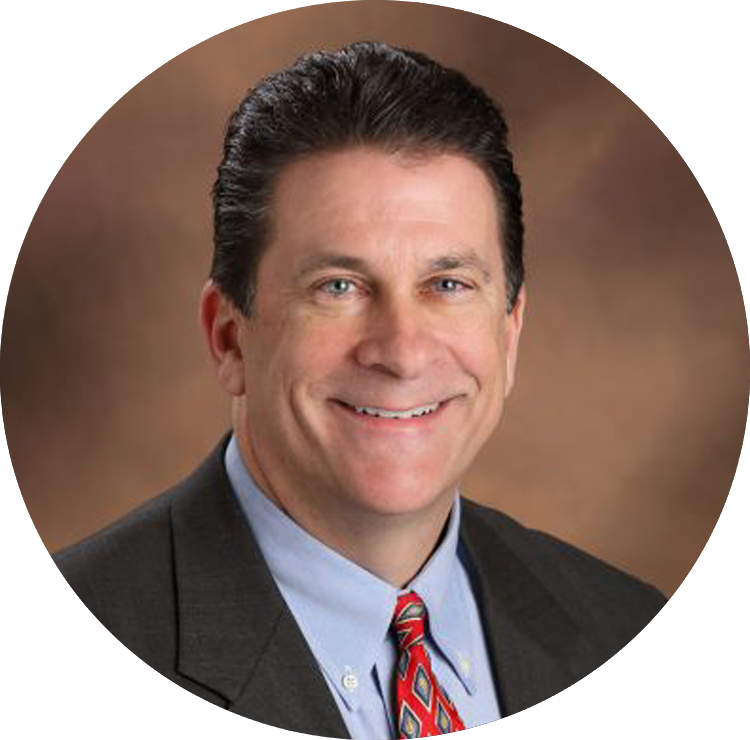 Fiscal 2020 was an extremely difficult year for our YMCA due almost exclusively to the COVID-19 pandemic. The fiscal year had three distinct segments. The first segment was the first quarter, pre-COVID, when our business units operated normally until everything was shut down in mid-March. The second segment, which also roughly corresponded to a calendar quarter, was when our YMCA was essentially shut down. The third segment, in which we reopened and began to recover, started in July. We are far from fully recovered, but for purposes of this discussion, the third segment of the fiscal year ended in December 2020.

This narrative will include a discussion of financial results for the entire fiscal year, followed by a summary of major financial developments in each of the segments previously identified.

Total expenses declined by $21.3 million, an amount insufficient to offset the much larger revenue shortfall. Personnel expenses accounted for $12.8 million of this decrease.

First Quarter 2020
First quarter financial results, which were expected to be extremely challenging, were much stronger than anticipated. A substantial reduction in membership revenue was predicted due to the decision not to renew our contract with Tivity Health.  Membership revenue for the entire year was budgeted to be $1.1 million less than actual 2019 revenue. First quarter 2020 membership revenue exceeded budget by almost 2%, and was 0.8% more than the prior year. Due to the shutdown in mid-March previously referenced, program revenue was significantly under budget in both School Age Services (-23%) and Camp Widjiwagan (-38%).

Due to a variety of factors unrelated to the pandemic, savings in operating expenses totaled $1.7 million through the first quarter. The results of the increased membership revenue and substantial expense savings were that our Net Operating Profit for the first quarter was $724,000 favorable to budget and $370,000 more than the prior year.

Second Quarter 2020
The YMCA of Middle Tennessee closed its doors in response to the COVID-19 pandemic on March 17 The centers outside Davidson County were closed until early May, and the Davidson County centers reopened in early June. Members were charged less than full rates upon reopening to acknowledge that we were operating with substantially reduced capacity and that many programs involving groups were prohibited by state and/or local health department mandates. Membership revenue for the second quarter totaled $2.9 million, versus $11.5 million budgeted.

Our School Age Services (SAS) business unit quickly pivoted from before- and after-school care to providing emergency child care for essential workers. There was virtually no program revenue in any business unit during the second quarter, as the child care being provided by our SAS staff was funded by $950,000 in Tennessee Department of Human Services (DHS) grants. We also received $210,000 to support the state’s Emergency Food Program.

Salaries, wages, benefits, and taxes were $6.7 million below budget for the three months ended June 30.  All other variable expenses were much lower than budgeted as well; total operating expenses for the second quarter were $6.7 million less than budgeted and $6.1 under 2019. Despite these draconian expense cuts, Net Operating Profit for the second quarter swung from $724,000 favorable at the end of the first quarter to $2.6 million unfavorable for the six months ended June 30.

Circumstances began to improve as membership centers reopened and we were able to resume charging full membership fees. For example, in June, we recognized $1.8 million in membership revenue, less than half of the $3.9 budgeted, but substantially higher than the $181,000 recorded in May.

Third and Fourth Quarters 2020
The revenue profile in the membership centers began to slowly improve in July, once all the centers had reopened and members were charged full fees. Through DHS grant funding, School Age Services continued to offer child care and free meals to children of essential workers, and SAS and Camp Widjiwagan staff pivoted to provide virtual learning centers for students in hybrid school models once the school year began. Widjiwagan was able to run a limited capacity day camp program starting in June and July, but its revenues were much lower than budgeted.

Cash/Statement of Financial Position
In a calamitous year like 2020, conserving cash was critical. We consumed $5.6 million in cash during 2020.  Our consumption was significantly mitigated by federal child care grants totaling $6.2 million, and by the receipt of $5.7 million through a combination of insurance reimbursement and sales proceeds related to the damage to and sale of a portion of the Y-CAP property in East Nashville. We would have consumed $17.5 million in 2020 were it not for these unanticipated cash inflows.

Our liquidity position improved dramatically early in 2021. In January, our YMCA received an unsolicited gift of $18 million from the MacKenzie Scott Foundation. A task force has been formed to develop recommendations regarding the utilization of this gift. We also received a Paycheck Protection Program loan of $8.9 million in March. We are optimistic that most of this loan, if not all, will ultimately be forgiven. We continue to be intensely focused upon our long-term goals of fully funding operating expenses from current operating revenue and reducing long-term debt in our capital structure.

In addition to the unexpected cash inflows, there were three other significant items in our Statement of Financial Position during 2020. In May, we borrowed $7.5 million under our revolving credit arrangement to protect our YMCA from potential liquidity issues in the financial system. This loan was still outstanding at year-end, and the proceeds remained in operating cash.

In 2015, we entered into a fixed-rate for floating-rate interest rate swap to eliminate our exposure to increasing interest rates. Declining rates, such as those experienced during 2020, increase the liability owed under the swap arrangement due to the underlying floating rate being significantly less than the fixed rate in the swap arrangement. Our Interest Rate Swap Liability increased by $1.37 million during 2020.

2021 and Beyond
Midway through 2021, we have many reasons to be encouraged. Membership revenue and center utilization continue to recover, but we have a long way to go to truly return to the membership revenue we enjoyed before the pandemic.  Demand for summer children’s programs at Widjiwagan and at the membership centers has been strong.

Significant increases in operating costs, particularly part-time salaries and wages, make recovery even more challenging in all business units and programs. We have had to significantly increase hourly pay rates to attract and retain staff, and have had to offer signing and retention bonuses as well.

Although the length and extent of our recovery is impossible to predict, the extremely generous and totally unexpected gift from the MacKenzie Scott Foundation and the anticipated forgiveness of our Paycheck Protection Program loan have lessened our short-term liquidity concerns. Our ongoing challenge for the foreseeable future is to adapt our YMCA to the financial realities of the “new normal.”

The hard but necessary decisions that have been made during 2013-2015 and again during 2020 have resulted in our YMCA being able to sustain itself during difficult times. We continue to focus strongly on making sound financial decisions for the long-term health of the organization while striving to best serve our vibrant and dynamic community for years to come. We appreciate your continued support and encouragement as we work to fulfill our mission. 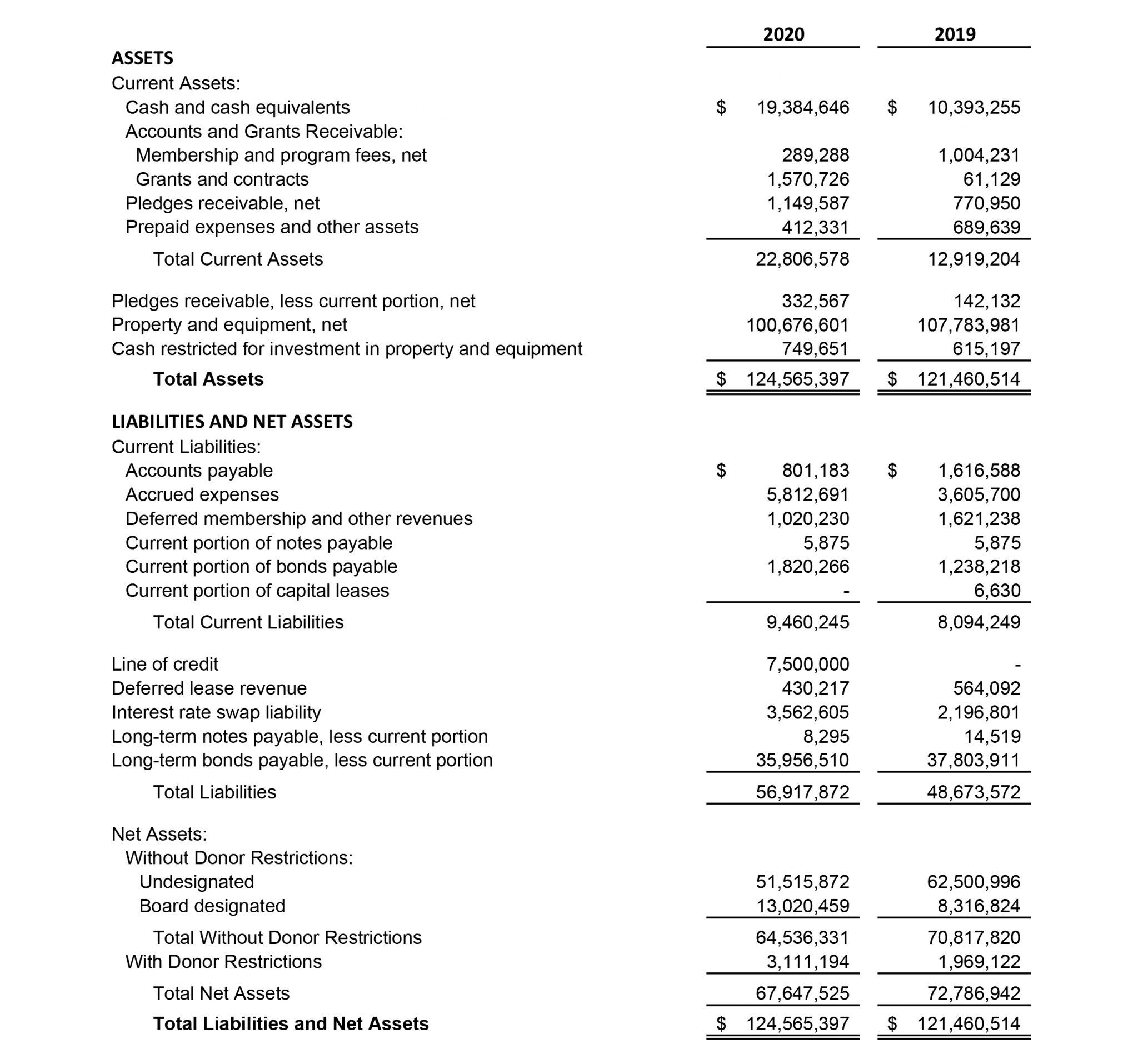 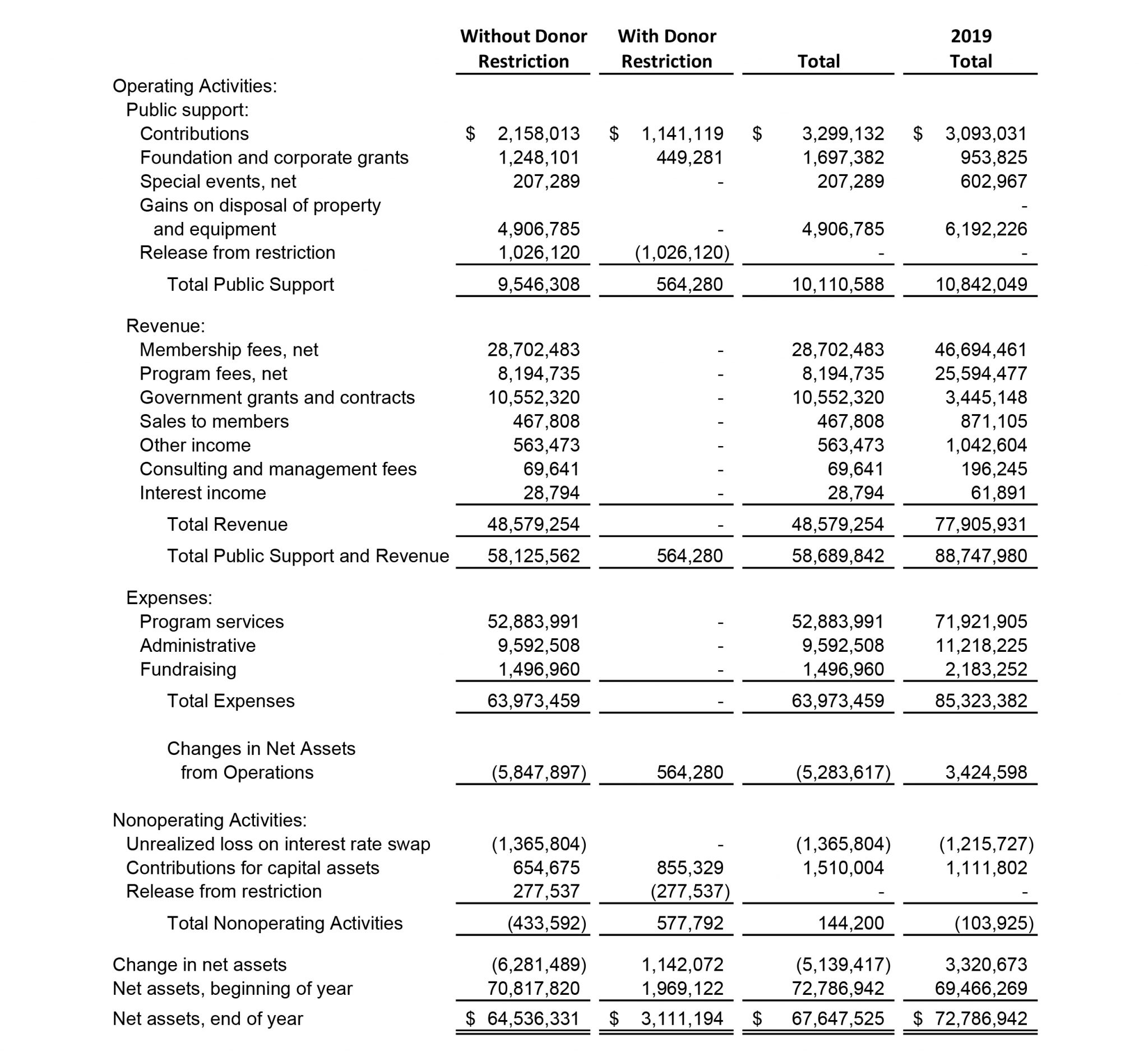 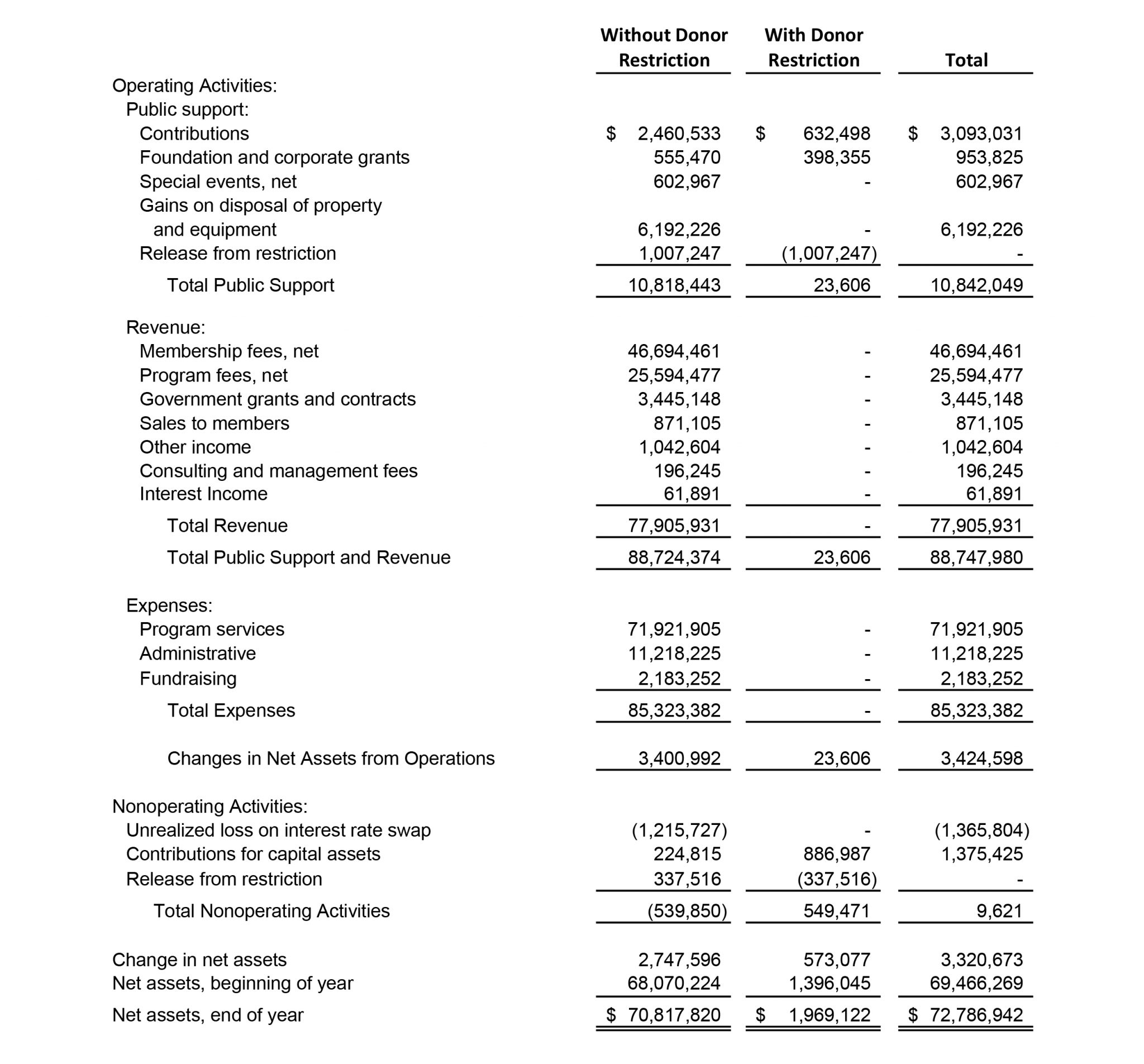